For more than 40 years, Craobh Dugan has played the traditional tunes of Ireland throughout the Utica-Rome area and continues to promote the music, dance, history, and language of the culture.

Craobh Dugan’s musicians make time for music at almost all of their meetings. Pictured here at a meeting in October 2017 from left to right are Lauren Endres, Mike Carroll, Skip Mansur, one of Craobh Dugan’s original founders the late Jim O’Looney, Mike Hoke, and Mary Margaret Krukonis.

It’s a little after 7:00 on a Tuesday night. Pub patrons are gathered around the bar and sitting at tables conversing in the cozy golden light of Stockdale’s Bar and Grille in Oriskany as they sip pints of Guinness and local craft brews. They hardly notice the seven or eight musicians at the nearby tables opening cases and pulling out well-worn musical instruments.

Suddenly above the soft background of the pleasant talking a fiddle tune emerges. A mandolin joins in and then a bouzouki begins to strum. More fiddles, a harp, and a wooden flute take up the melody. And finally, the pulse of a bodhrán punctuates the music with its deep percussive tones.

The session has begun. 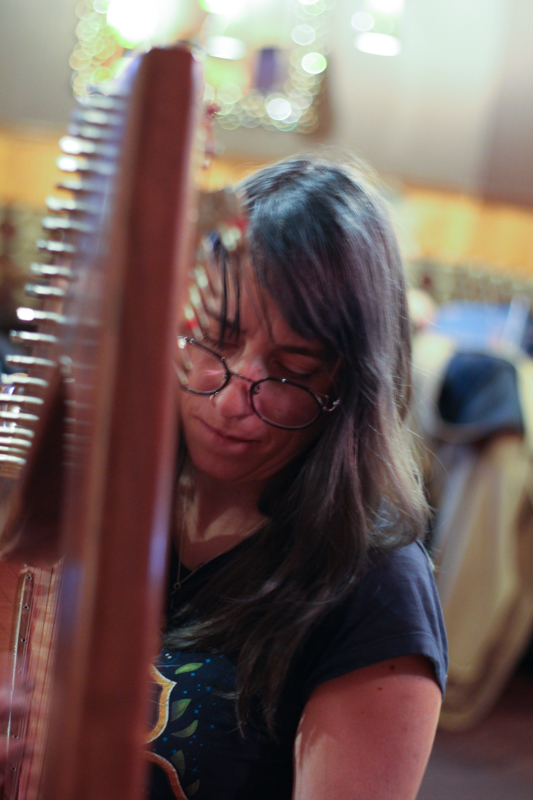 “People come in to play at different times,” said Craobh Dugan’s president Chris Hoke. “A couple of musicians will start playing and then a few minutes later someone else will come in. Within an hour there will be a group of 12 musicians or more. I really like that people feel comfortable joining in. And it’s really cool when we have traveling musicians stop in. They find out about our sessions on the internet, and they just kind of pop in. That’s what the sessions are all about - people coming together for the joy of playing.” She recalled the group’s delight when at one session, in particular, a professional musician from Ireland stopped by with his uilleann pipes, a smaller softer version of the familiar Scottish bagpipes.

Founded in 1978 by Frank and Pat Dugan, who had been members of the Gaelic Society in New York City, and Jim O’Looney, a native of Co. Kerry, Ireland, Craobh Dugan is a branch of Comhaltas Ceoltóirí Éireann (CCE), an international organization founded in Dublin, Ireland, in 1951. That’s about the time that traditional Irish sessions began to appear in pubs around the world where Irish emigrants were concentrated, especially in England, Australia, the United States, and Canada. Though many of the tunes and songs are a century or two old, the idea of the pub session started in the mid-20th century.

But before long, people who trace their DNA to many other cultures were also taking up the instruments and tunes and joining in. Now there are hundreds of CCE branches worldwide including in countries where few people with Irish roots live, with particularly active branches even in Japan.

Craobh Dugan also welcomes members of any nationality. They share a common love of the music of Ireland and other parts of the culture as well, like dance, language, and history.

Craobh Dugan’s céilí dance group practices on Friday evenings in Utica and performs with the group’s musicians locally. Pictured here are Karl Wuerslin and Gracie Schell (back) and Jim O’Rourke and Terry Bryla

Several members meet on Friday evenings for lessons in céilí dance, a type of group dance similar to square dancing and the Virginia reel.

“It’s a form of social dancing,” said Jim O’Rourke who leads Craobh Dugan’s dance classes held at the Seton Center at Our Lady of Lourdes Catholic Church on Genesee Street in Utica. “There are specific steps you need to learn in order to keep from tripping or stepping on each other’s feet, but you don’t have to be athletically fit,” he adds. “We teach each dance, including jigs, reels, and hornpipes, and keep working to help you improve it. We don’t judge. We’re in it for fun and to learn about the culture and keep the tradition alive.”

Often members of the dance group perform in costume with small groups of the musicians when they present shows at local libraries, museums, nursing homes, and festivals.

Craobh Dugan’s language officer Tom Malley began learning Irish Gaelic as a young boy in Staten Island when he heard his father, a native of Donegal, chatting with friends who were also from Ireland. In 1962 Malley joined the New York Gaelic Society where he was able to study the language in more depth.

Malley says it’s important to keep the Irish language alive because, “there are still songs, poetry, and folktales in Irish, and it’s growing not only in the Republic of Ireland but in Northern Ireland too.” Because of British penal laws and other political and economic factors the Irish language nearly disappeared between the 17th and 19th centuries, but around the turn of the 20th century, The Gaelic League and others in Ireland began efforts to revive it.

Malley said he loves the expressiveness of the Irish language and gave an example. “To say please excuse me in Irish, you say gabh mo leithscéal which translates to ‘take my half story’ because an excuse is half of a story.” He has taught language classes at local community colleges for many years and plans to teach them at the Irish Cultural Center of the Mohawk Valley when it opens.

Craobh Dugan music director Mike Hoke has connected Irish and New York history over the past two years to celebrate the Erie Canal’s 200th anniversary. He wrote The Irish and the Erie, an hour-long program featuring history, stories, songs and tunes about the Irish workers who helped build the Erie Canal. Members of Craobh Dugan perform the program at libraries, museums, and other venues, throughout Central New York and have recorded a CD of the music.

People of all ages are welcome to join Craobh Dugan and be part of the family-friendly picnics, dinners, and other member social events. The two monthly sessions, one at Stockdale’s and the other at Nail Creek Pub in Utica, are open to all musicians who play a traditional Irish instrument and know some of the tunes. There is a tune book with sheet music on the group’s website to help new members get up to speed and YouTube offers plenty of examples to help musicians pick up the style.

For several years, Craobh Dugan members have played aboard a float in the annual Utica St. Patrick’s Day Parade. Here in the 2018 parade from left to right are Ed Campbell, Lauren Endres, and Allyson Sklar.

If you’re wondering what the local Irish cultural organization does on St. Patrick’s Day, they will be playing traditional tunes at 16 Stone Brew Pub in Holland Patent this year (2019). But Craobh Dugan activities aren’t limited only to March. You can find out about all of their year-round events on their website at www.UticaIrish.org.

(This article first appeared in the March 2019 issue of ACCENT Monthly magazine, published by the Utica Observer-Dispatch.)